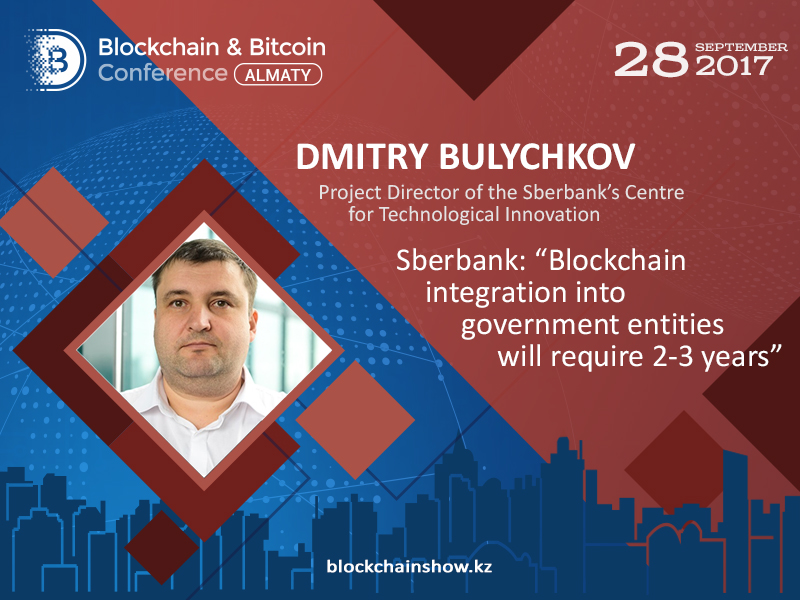 The blockchain should pass the stage of maturity, thus the integration of this technology into government entities and other sectors will require two or even three years. It was reported by Dmitry Bulychkov, a project director at Sberbank’s Center for Technological Innovation, in the interview for Blockchain & Bitcoin Conference Almaty. We talked to him about the impact of blockchain on the banking sector and about the development of this technology.

Dmitry Bulychkov is the head of Sberbank’s Center for Technological Innovation. He has been engaged in startups specializing in marketing, the Internet, and telecommunications over the previous 15 years.

BCA: Hello, Dmitry. A lot of departments, for instance, the Ministry of Communications of the Russian Federation, announce their intention to apply the blockchain. Why are such plans stuck at the level of statements and announcements?

D.B.: Hello. I also hear only announcements of the interest to the blockchain technology and intentions to investigate the opportunity of its application in certain departments. The fact is that the new technology should pass the stage of maturity. It means that a real blockchain integration into government entities’ processes will need some time. According to our estimates, it will take at least two-three years.

BCA: What is required for the development of decentralized technologies from the legislation?

D.B.: In general, the definition is required initially. One should specify the meaning of cryptocurrency and distributed ledgers as well as make blockchain-based deals more significant. It would notably add clearness to the market and encourage the launch of real projects based on this technology.

BCA: According to German Gref, the blockchain may lead to the disappearance of conventional banks. Do you think it is possible?

D.B.: The main purpose of banks is risk and liquidity management. The blockchain can offer a cross functional financial electronic platform, allowing banks to provide services for risk assessment and liquidity management as well as a range of other activities. Therefore, it is quite possible that current banks with accounts, offices, and ATMs will be replaced by robotized services based on the artificial intelligence.

BCA: How do you see Sberbank in 10 years if the majority of processes will shift to the blockchain?

D.B.: It’s difficult to predict changes, as the world is rapidly changing. Sberbank is currently turning into a technological company with a banking license. It’s pretty hard to tell what technologies and how will be changed in 10 years. Look at the situation happening 10 years ago: there was no mobile bank at all. However, now it is one of leading customer assistance channels.

BCA: What sectors are most interested in the blockchain?

D.B.: Nowadays, it is finances and information sharing, in future – artificial intelligence, robotics, and Internet of Things.

BCA: What is your attitude to the ICO trend and how can you assess a danger of this tool for investors?

D.B.: Currently, it is a quite specific, high-risk tool, allowing to either earn much or lose everything. I like the ICO concept but prefer not to work on this market without having the necessary knowledge of this segment.

BCA: What blockchain projects are you primarily focusing on now?