“At first, I lost my money and then decided to learn what cryptocurrency is.” The story of Batyrbek Umarov, Founder at BlockchainKZ 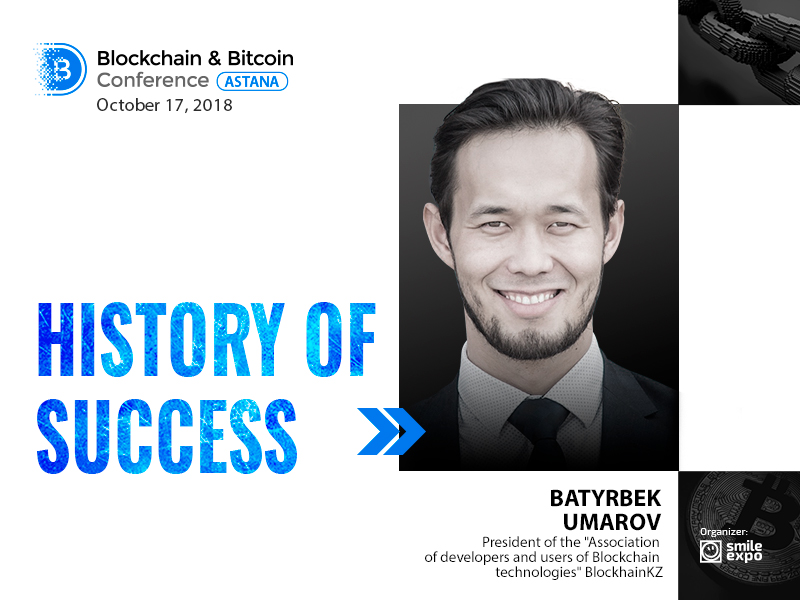 His first investment in cryptocurrencies failed for the lack of information about the relevant market but then he caught up. Currently, an investor and a crypto enthusiast Batyrbek Umarov is President of the Association BlockchainKZ. The Kazakhstan community was established in order to promote the distributed register technology and share the information about it.

We interviewed Batyrbek about his first steps in the cryptocurrency universe, the idea of the blockchain community creation in Kazakhstan as well as the current state of the industry in the country.

“I lost my money because had no notion of the industry”

My first job was way too far from the cryptocurrency space, I got it at the age of 16 and started working as a camp counselor.

I came across cryptocurrencies in 2016: my acquaintance invited me to the company and told about the notion of cryptocurrencies and what profit they can bring. At that moment, I didn’t have the foggiest idea about it and as a result, I lost my money.

This situation made me learn what cryptocurrency is and how it works. The task was pretty difficult since few people heard of cryptocurrencies and understood their phenomenon at that time. That is why I started traveling across the globe, blending into the community, which helped me find lots of like-minded people.

“Everyone had the same questions and problems”

The experience I gained when traveling inspired me to create the Association BlockchainKZ. Visiting many countries, one thing grew clear to me – everyone came up with the same questions and problems. The same questions were discussed in our country also, so in April 2017, the Kazakhstan blockchain community was established to solve problems together and unite like-minded people.

The main aim of the Association is the creation of a networking platform for people interested in blockchain and cryptocurrencies. Here, they can share knowledge, communicate, organize events, establish business and fulfill projects.

“The state showed a negative attitude towards cryptocurrency”

At first, I faced some difficulties with the community development. For example, the state showed a negative attitude towards cryptocurrency due to the lack of understanding of its nature, mechanisms and processes. However, when the President told that the sphere should be investigated and developed, the authorities changed their mind.

As natural persons, we didn’t have the needed legal status and had no one to enter into partnership with. That is why we established the Association of Developers and Users of Blockchain Technologies BlockchainKZ.

Currently, the Association works in several directions – people, business and state. Achievements are now visible in each of them, for example, we give consultations to entrepreneurs. What is more, we organize meetups and courses to eradicate illiteracy. Moreover, we even developed our own program. Right now, a specialized platform is in the process of creation to accelerate the process.

In my opinion, the state should be the main focus since it defines the future and rules of the blockchain market in our country. We hold a two-way dialog, which is vital. Only the state can provide favorable conditions on the market and protect the citizens by introducing the right legal framework.

I currently take part in working groups at the Ministry of Information and Communication on Blockchain Technologies as well as the Ministry of Economy on the Determination of the Legal Status of Cryptocurrencies and Tokens. Our Association held lots of workshops, events for state institutes, national companies and even legal bodies.

I delved into the universe of blockchain technology and understood what it brings: the evolution of many life aspects, business and state. It is just the beginning, I see the prospects and strive to participate in this incredibly interesting process.–

“By doing something for yourself, you bring benefit to the community”

It’s not always possible to get personal benefit since we all are interconnected. By doing something for yourself, you provide benefit to the community. There are no limits.

The Association carried out the poll on cryptocurrency and blockchain among 5000 people, the figure was 1.1 of 5. That is why first of all I ask everybody to learn the information, read a lot and join our Association if something remains unclear. We will help.

Batyrbek Umarov will speak at Blockchain & Bitcoin Conference Kazakhstan with a presentation titled ‘Kazakhstan-style blockchain or features of blockchain development in Kazakhstan’.
The event is scheduled for October 17 in Astana.